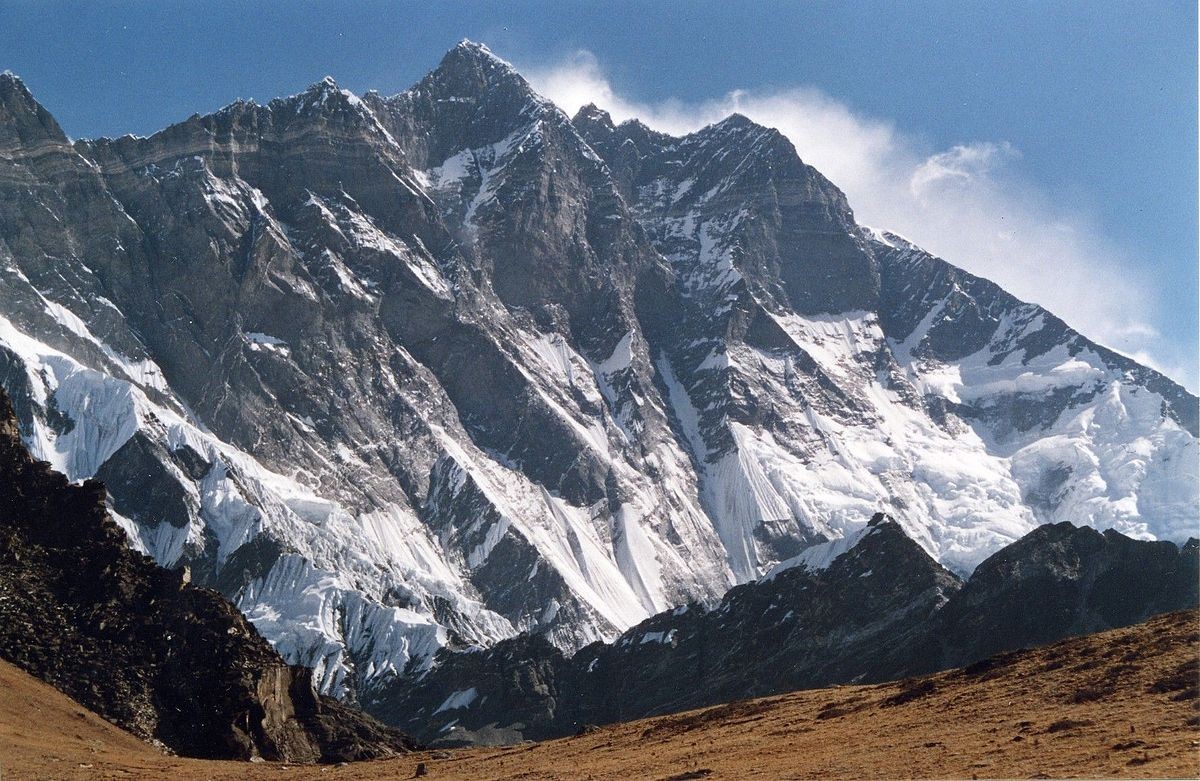 The 4th highest mountain of the World Mt Lhotse is the part of the Everest Massif. Lhotse means the “South Peak” in Tibetan and it also fits it as it lies to a few kilometers away on the south from Everest. Connected with the South Col of Everest, the climbers even share the same base camp. The Mountain actually comprises of the three summits, main peak at 8516 m, Lhotse middle at 8414 m and Lhoste Shar at 8383 m. Rising 3.2 km vertically within 2.25 km of distance, Lhotse has the largest faces among the mountains in the world. The large face and Khumbu Icefall make it one of the most dangerous peaks to climb. No doubt, only a few attempts of ascent have been successful. After a number of attempts, the south face was successfully ascended in 1984. However, it was ascended in 1956 through the West Face by two Swiss Climbers: Fritz. Luchsinger and Ernst. Reiss from the Swiss Mount Everest /Lhotse Expedition.  Lhotse Middle remained, for a long time the highest unclimbed named point on Earth. But on May 23, 2001, four climbers from a Russian Expedition namely: Eugeny Vinogradsky, Sergei Timofeev, Alexei Bolotov, and Petr Kuznetsov were able to successfully ascend it.

The main Summit is the border between Tibet and Khumbu Region in Nepal. The route to Lhotse follows the Everest South Col up to the yellow band beyond Camp 3 after which the route diverges directing the Everest Climber to the left while the Lhotse Climbers take a right upwards to the Lhotse Face. The final part of the summit is led through the narrow “Reiss Couloir” until the main peak is reached.

Lhotse truly offers the fascinating beauty of the Himalayas and invincible scriptures of snow.

Our representative will receive you at the airport and settle you at the hotel. Hotel: Bed and Breakfast

We will perform all the formalities, take permits and fulfill the documentation process. you will also be briefed about the overall expedition. Hotel: Breakfast and Dinner

After having breakfast at the hotel, we will take a domestic flight to Lukla Airport and start our trek from Lukla to Phakding. Lodge: Breakfast/Lunch/Dinner

On this day we start our trek from Phakding after the wonderful breakfast at the lodge. We slowly move towards Namche Bazaar exploring the culture and nature.

Namche Bazaar 3440 m is a popular destination for trekkers heading to the high Himalayas with abundant lodges as well as market, and other accommodation facilities. It serves as a hub for acclimatization, offering the experience of Sherpa Culture and tradition.

After resting and acclimatizing at Namche Bazaar, we trek towards Thyangboche 3,860m. The temperature slowly starts falling as we move upwards and the population is relatively low with fewer tea houses and lodges on the way. Lodge: Breakfast/Lunch/Dinner

Another stop for trekkers and climbers is Dingboche 4,243m, a valley in Khumbu region offering lodges, as well as banking services to the travelers. We rest here for acclimatization. Lodge: Breakfast/Lunch/Dinner

Lobuche is a remote and barren valley on the route to the Himalayas. With almost no trees and vegetation, Lobuche lies near the foot of the Khumbu Glacier. It is the last stop with lodging on the trail. Lodge: Breakfast/Lunch/Dinner

The trek slowly gets difficult as we move upwards to the Base Camp from Lobuche. The climbers to Lhotse and Mt Everest share the same base camp. From here they diverge to reach their destinations.  Tent: Breakfast/Lunch/Dinner

During this period we move forward towards Lhotse, perform prayer rituals and climbing training. We then ascend and summit Lhotse and return back to the base camp. Tent: Full Board Service

After the successful ascent of Mt. Lhotse and cleaning of Base camp, we slowly move downwards to Pheriche. Since descending is easier and faster than ascending we trek longer distances in a shorter time period.  Lodge: Breakfast/Lunch/Dinner

We move down to Namche and explore the town. It is the center of trade in the Khumbu region.  Lodge: Breakfast/Lunch/Dinner

After the wonderful stay at Namche, we head towards Lukla from where we will leave for Kathmandu.  Lodge: Breakfast/Lunch/Dinner

We take a domestic flight back to Kathmandu and rest at the hotel. We gather for a farewell dinner organized by the company. Hotel: Bed and Breakfast

If you have not extended your stay, our representative will drop you off at the airport for your departure.