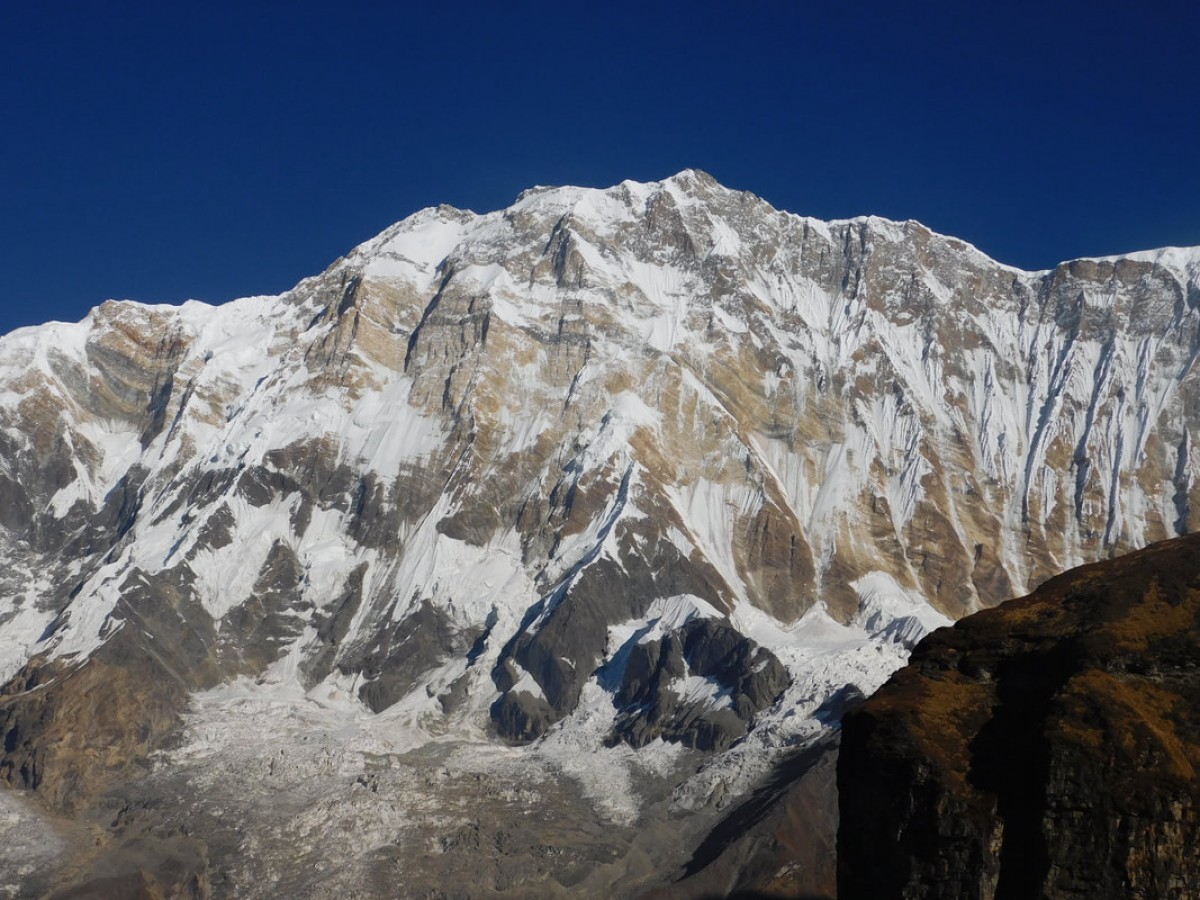 Annapurna I, the 10th highest mountain in the world lies in the 55km long massif in the  North-central section of Himalayas including Annapurna I, 9,091m, 13 peaks over 7000 and 16 peaks over 6000m. Named after the “goddess of Food”, Goddess Annapurna, this peak rises east of the Kali Gandaki Gorge (which is the deepest gorge in the world) separated from the Dhaulagiri Massif. The first successful attempt was made by Maurice Herzog and L. Lachenal from the French Expedition team on 3rd June 1950 which remained the highest summit attained until the first successful ascent of Mt. Everest, three years later. The most popular route to Annapurna I is through the South face which is huge as well as 3000 ft higher than the south face of Mt. Everest but free from avalanches.

The climb to Annapurna I is considered to be one of the most challenging ones after K2 so it is very necessary to have years of experience in rock and ice climbing and expeditions of peaks over 7000m. It takes physical as well as mental strength to ascends and descend through the foxed routes on steep terrain.

Arrival in Kathmandu & transfer to Hotel

We prepare for the expedition and check if we have all the required gear and equipment. We also take the required climbing permit and fulfill all documentation.

After breakfast at the hotel, we take a domestic flight to Pokhara, the city of lakes. The 30 minutes long flight offers exotic views of the Himalayas around the valley. Once we reach Pokhara, you may go sightseeing around Fewa Lake and the marketplace. Hotel: Bed and Breakfast

Today we drive from Pokhara to Lete, a village in the remote area of Manang with a low settlement and few teahouses.  Lodge: B/L/D

As we directly reach to Lete from Pokhara, we rest here for a day to acclimatize ourselves and prevent altitude sickness. Lodge: B/L/D

After a day rest, we move from Lete to Thulobugin a small village in the Dhaulagiri Region. Lodge: B/L/D

The trail gets steeper as we move from Thulo Bugin to Hum Khola. But the mesmerizing beauty of the surrounding nature keeps fueling the climbers throughout the journey. Camping

As we reach Hum Khola, the trails ascend and descend until we reach Annapurna Base Camp to prepare for climbing. Camping

After performing our prayer rituals we start climbing the Mountain. Climbing Annapurna is very challenging because of its huge face. However, our professional and experienced climbers and guides will make it as easy as possible for you. After the successful summit, we move back to the base camp.

We clean up the base camp and start trekking back to Thulobugin. Moving across the forests, uphill and downhill we reach Thulobugin to rest for the night.  Lodge: B/L/D

Following the same trail, we descend further to Lete. If you wish to extend the journey we may visit Jomsom and Muktinath from Lete. Lodge: B/L/D

Leaving the beautiful and diverse Lete behind we drive to another beautiful city Pokhara. Hotel: Bed and breakfast

From Pokhara, we take a flight back to Kathmandu and rest at the hotel. You will be taken for sightseeing around the city the next day. We will join you for the farewell dinner in the evening. Hotel: Bed and Breakfast

Its time for farewell. One of our representatives will drop you off at the airport for your departure to home.